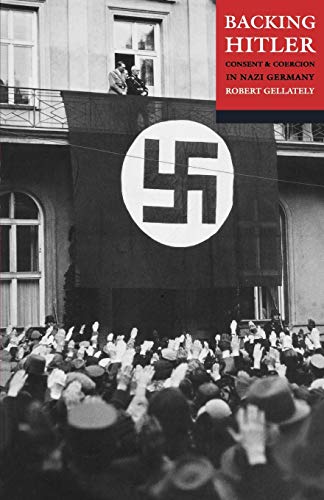 Synopsis About this title Debate still rages over how much ordinary Germans knew about the concentration camps and the Gestapo's activities during Hitler's reign. Now, in this well-documented and provocative volume, historian Robert Gellately argues that the majority of German citizens had quite a clear picture of the extent of Nazi atrocities, and continued to support the Reich to the bitter end. Culling chilling evidence from primary news sources and citing dozens of case studies, Gellately shows how media reports and press stories were an essential dimension of Hitler's popular dictatorship. Indeed, a vast array of material on the concentration camps, the violent campaigns against social outsiders, and the Nazis' radical approaches to "law and order" was published in the media of the day, and was widely read by a highly literate population of Germans. Hitler, Gellately reveals, did not try to hide the existence of the Gestapo or of concentration camps. Nor did the Nazis try to cow the people into submission. Instead they set out to win converts by building on popular images, cherished ideals, and long-held phobias. And their efforts succeeded, Gellately concludes, for the Gestapo's monstrous success was due, in large part, to ordinary German citizens who singled out suspected "enemies" in their midst, reporting their suspicions and allegations freely and in a spirit of cooperation and patriotism. Extensively documented, highly readable and illustrated with never-before-published photographs, Backing Hitler convincingly debunks the myth that Nazi atrocities were carried out in secret. From the rise of the Third Reich well into the final, desperate months of the war, the destruction of innocent lives was inextricably linked to the will of the German people. "synopsis" may belong to another edition of this title. About the Author: Robert Gellately is the Strassler Professor in Holocaust History at Clark University, and is the author of The Gestapo and German Society: Enforcing Racial Policy 1933-1945. He lives in Shrewsbury, Massachusetts. From Publishers Weekly: Using newspapers and radio broadcasts of the day as evidence, Gellately (The Gestapo and German Society), Strassler Professor in Holocaust History at Clark University, effectively demonstrates how "ordinary Germans" evolved into a powerful base of support for the Nazi regime. Although Hitler and the National Socialists had never garnered an outright majority in elections before 1933, the author convincingly shows that "the great majority of the German people soon became devoted to Hitler and they supported him to the bitter end in 1945." The Nazis achieved this political miracle by "consensus." The Italian Marxist Antonio Gramsci argued that political regimes could hardly expect to use unlimited terror against their subjects a technique combining the threat of terror and coercion would be more effective. Using Gramscian theory is hardly new in an analysis of Nazi Germany, but Gellately does make a provocative claim: that the Nazi use of terror against certain categories of "undesirables" (first Communists, Socialists and trade unionists, then Catholic and Protestant opponents, then the mentally and/or physically impaired, then the Jews and Gypsies) was purposively public and that most Germans agreed with such policies. Decrees, legislation, police actions and the concentration camps were not meant to be hidden from the German people, but in fact were extensively publicized. Some of the same arguments have been made in Adam Lebor and Roger Boyes's Seduced by Hitler (Forecasts, Mar. 26), but readers will notice that Gellately offers a far more sophisticated argument and more abundant evidence than Daniel Goldhagen's cause c‚lŠbre, Hitler's Willing Executioners. In truth, Gellately's work is what Goldhagen's book could have been, but wasn't; that is, a closely reasoned and tightly constructed analysis. 42 illus. not seen by PW. Copyright 2001 Cahners Business Information, Inc. "About this title" may belong to another edition of this title.