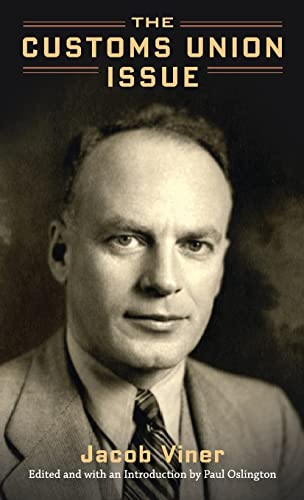 Synopsis About this title Jacob Viner's The Customs Union Issue was originally published in 1950 by the Carnegie Endowment for International Peace. It set the framework for the contemporary debate over the benefits or otherwise of preferential trading agreements such as the European Union, NAFTA, and APEC. Viner developed the concepts of trade creation and diversion in this work as he pioneered the analysis of the global politics of trade agreements. This revival of Viner's classic work includes an introduction that places this book in the context of his own intellectual development and the economic and political situation of the post-WWII world. The introduction also traces the reception of Viner's work and discusses its continuing relevance for international economists, political scientists, and historians. "synopsis" may belong to another edition of this title. About the Author: Jacob Viner (1892-1970) was one of the great economists of the twentieth century who shaped the field of international economics. After a PhD thesis under Frank Taussig at Harvard University, he moved to University of Chicago where he built its reputation in economics with Frank Knight and others. He was then recruited by Princeton University to build what is now the leading international economics research group in the world. There, Viner also contributed as a policy advisor, mentor, and correspondent to leading economists on both sides of the Atlantic and led the late twentieth century intellectual transformation of the history of economics.Paul Oslington is an international trade economist and historian of economics who is an expert on the work of Jacob Viner. He received his degree in economics from the University of Sydney, and his work has been published in leading journals of economics and the history of economics. He is currently Professor of Economics at Australian Catholic University and has held visiting appointments at University of Oxford, University of British Columbia, and Princeton University. Review: "Jacob Viner's seminal work on customs unions drew attention to the key fact that preferential free trade agreements are different from, and generally inferior to, non-discriminatory free trade. While the issues we confront today over the downside of preferential trade agreements have shifted and multiplied, Viner's work remains as a warning that policymakers cannot afford to ignore." --Jagdish Bhagwati, University Professor (Economics, Law and International Affairs), Columbia University; author of Termites in the Trading System: How Preferential Agreements Undermine Free Trade "Jacob Viner's The Customs Union Issue is a classic. Due to the spread of regional and preferential trade arrangements today, it is as relevant now as it was in 1950, when it was first published. Paul Oslington's introduction gives us insight into its origin, and I hope the book's republication introduces it to a new generation of readership." --Douglas A. Irwin, John Sloan Dickey Third Century Professor in the Social Sciences, Department of Economics, Dartmouth College "While many innovators are victims of Stigler's Law-the observation, due to Robert Merton, that discoveries are seldom named after their discoverer-Jacob Viner is a happy exception in economics. He is known widely for, inter alia, originating the concepts of Vinerian trade creation and diversion. This timely new edition of his classic The Customs Union Issue will re-acquaint a new generation of trade students with not only the original discussion of these concepts but also the admirable rhetorical style of his generation of economists. It will also interest students to read a theoretical economist whose interest is so strongly policy-driven. In an era when one wonders if theory... has any impact on policy-making at all, it is refreshing to re-read an economist clearly speaking to both his colleagues and to policy-makers. This book should be on the shelves of every trade economist." --Martin Richardson, Professor, Research School of Economics, The Australian National University "Viner's fine analytical skills are apparent in the carefully worded suggestions to policy-makers and theoreticians about what things they might attend to as they examine their actual caseELand the depth of his theoretical insight is on display. The volume is a welcome reminder of an argument that continues to resonate after more than half a century." -- Journal of the History of Economic Thought "About this title" may belong to another edition of this title.